Last week, I was giving a presentation to a group requiring the use of a projection screen. I was unfamiliar with the auditorium, but figured, “How hard can it be to lower a screen on a stage?” The answer, not surprisingly, is very. 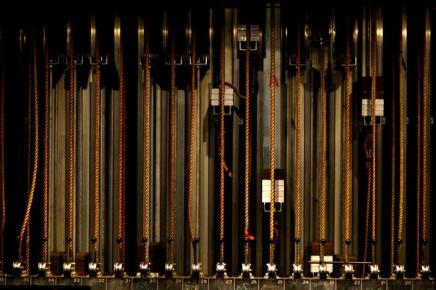 When I went backstage, I was confronted with a row of 15-20 pulleys, all labeled with various letter and number combinations. N-3. J-21. S-14. I felt as if I had drifted into some strange bingo hall without my placard. For about 10 minutes, I searched for some instructions, perhaps a key laminated to the wall, a Rosetta stone hiding next to the Beauty and the Beast costumes. As the presentation drew closer, and mild panic began to set in, I did what anyone in my position would have done. I just started pulling.
I began with the “S-labeled” ropes, figuring they might be the abbreviation for screen. Sure enough, S-7 began raising and lowering the screen. Unfortunately, it began raising and lowering the entire screen housing. With the screen housing now sitting just above orchestra pit height and my presentation minutes away, I resorted to blind yanking. Like George of the Jungle swinging haphazardly to doom, I pulled, yanked, grabbed, and twisted every rope within reach. Stage lights danced up and down, curtains lurched back and forth, and my recently arriving audience stared awestruck at the maelstrom wondering if this was all part of the show.
Eventually, I found a stagehand who actually knew what he was doing. With a stern look of disapproval, he flipped a switch under a light casing labeled “screen motor” and effortlessly the screen descended. Among the many lessons gleaned from this experience, one can see parallel pitfalls in many of our approaches to endurance training.
As we train, we expect to see results. In fact, if we see no results, we are encouraged to review, revise and reconsider our training approach. However, like me as the small crowd of attendees began to arrive, as our goal races and events draw nearer, anxiety and the uncertainty that accompanies any competition can get the best of us. We search for signs everywhere that we will meet or exceed our goals, and when we are confronted with their absence, we resort to yanking on as many pulleys as we can reach.
There are relatively few variables available for manipulation in any training plan. But when we begin scrambling for certainty, instead of making small adjustments to one, we grab rope after rope, tugging with all our might, hoping it will result in some magical (and immediate) breakthrough and benefit. We watch as our training swings wildly, and ultimately ineffectively, until we either give up, crash and burn, or find someone who can more easily pinpoint the small flip of the switch we need.
In a recent Tim Ferriss Show episode, Tim spoke with founder of The Happy Body project and weightlifting guru, Jerzy Gregorek. One of Jerzy’s core principles with all his clients is the concept of micro-progressions. In the show, Jerzy recounts the decade-long work with a single client to move him some 20-inches in depth in a single Olympic lift. The approximately 2-inches per year development is the heart of micro-progression and the antithesis of our far too common “pulley panic.”
As endurance athletes, we must trust in a long-range process. We must be vigilant and attentive to our training, making small adjustments when necessary, but allowing those adjustments the ample time needed to reveal results. We must avoid the temptation to “shake things up” too significantly, or in the hopes of finding the magic combination for confidence, while being willing to change our approach to break from a rut, or see new and unexpected gains. In endurance training, no one wins the tug of war.